Inequity Reigns, Even in Charity 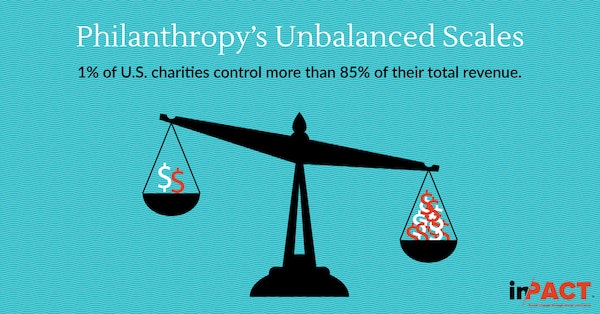 When we think of inequities in the U.S., we often focus on the great inequalities in the distribution of income and wealth. Economists like Emmanuel Saez and Gabriel Zucman have been compiling data that shows stunning unfairness, and they are hardly alone. Last year, the two economists noted in a London School of Economics blog post that in 2012 0.1% of Americans controlled 22% of the nation’s wealth. That’s 160,000 families in the U.S.—each with total net assets of at least $20 million—in possession of as much wealth as is held by the 145 million families at the other end of the economic spectrum. When we see numbers like this, it’s hard not to get angry.

Inequity is not limited to income and wealth; it even exists in the world of philanthropy. According to Ken Berger, president and CEO of Charity Navigator, in the Huffington Post: 1% of U.S. charities control more than 85% of the $1.5 trillion in revenue they take in. That’s some 15,000 charities out of 1.1 million garnering more than $1.275 trillion.

That’s ironic because charity wouldn’t exist were it not for inequity. The act of giving is an acknowledgement that resources haven’t been justly distributed and individuals are trying to redirect them by giving back. At the very core of philanthropy is an attempt to balance the scales.

No doubt, as intelligence and talent affect the distribution of wealth and income, the dispersal of funds within the charitable universe is governed to some degree by the soundness of the charity and, one would hope, the urgency of the mission. But sadly, as we know from the inequities in wealth, the Darwinian rule that the fittest will triumph frequently doesn’t prevail. It often is perverted by advantages of birth and knowing the right people.

The same can be true in the world of philanthropy. The flow of donations to certain charities sometimes reflects who sits on a nonprofit’s board of directors as much as the righteousness of a cause. As the old saying goes, money begets money, and access to the people with money also begets money.

With this concentration of donations to the richest 1% of charities, we ignore many pressing needs, particularly at the local level. Nonprofits working in a giver’s own neighborhood may fall short because bigger national or international charities control the pots of money.

Of course, not every charity deserves support. Some are poorly run, wasting as much on salaries and other overhead as they are able to spend on the actual mission. But there are countless charities in that 99% that do merit support.

So how can we work towards better distribution? Even though people are the source of all money that goes to charities, they are not always the ones making the determination about where that money should be given. Companies represent a large chunk of giving in the U.S. and usually it is the board of directors or management who makes the decision about how their largesse will be handed out. Would the customers who helped generate those profits make the same decisions? Perhaps. But maybe it’s time to start asking them.