The City Bin Co. – Gene Browne’s Ireland based waste management company – has been disrupting the industry since 1997 by focusing on service excellence in an industry not typically associated with innovation.

A cutting-edge employee engagement solution that allows City Bin’s employees to direct a weekly contribution from the company (not from their own pockets) to the causes they care most about, GivingDay has been gathering momentum since it was launched two months ago. 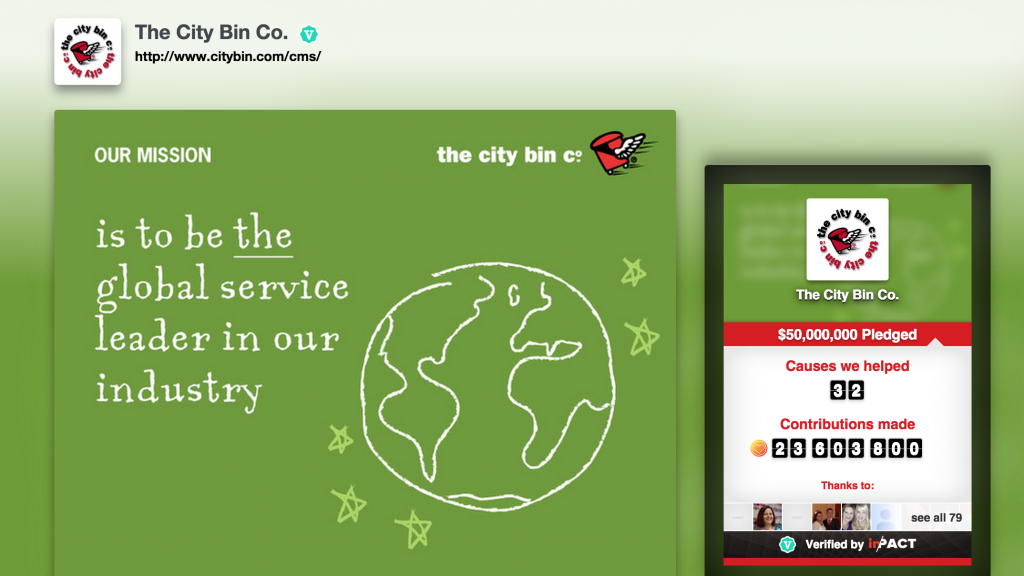 “We’re always looking for ideas that go beyond the familiar and make us innovative pioneers,” says Gene.

It all started with a simple email, which Gene addressed to every single employee, asking two questions: What charitable organization would you nominate to be on the list? And, most importantly, why?

“The most important thing we did to start the process of democratizing the way we donated was let the employees choose the charities and then let them make the actual donation on the company’s behalf.” 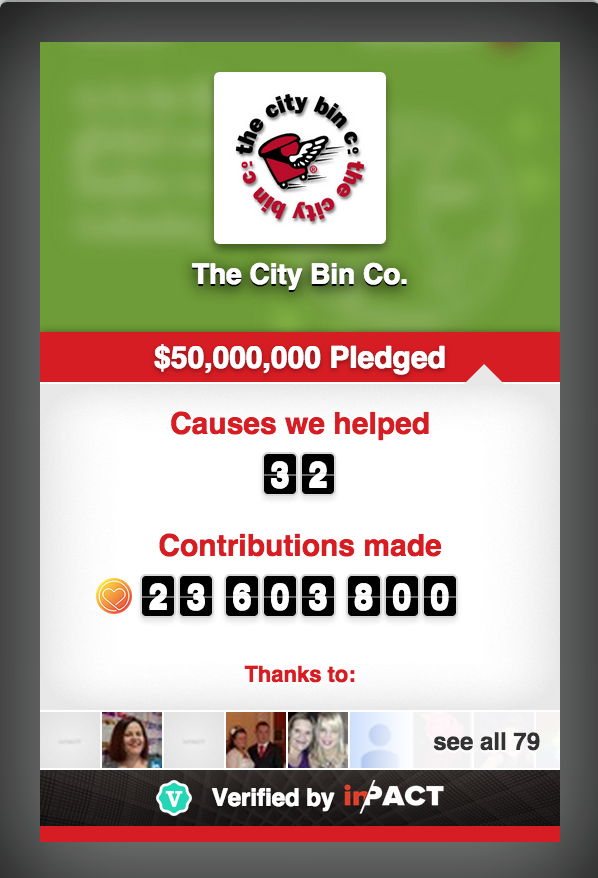 To Gene’s surprise, instead of opting mainly for “tier 1” charities everyone’s heard of, the majority of Gene’s employee’s chose mid-range or very small charities – places close to home that supported issues affecting their own families or those touching someone close to them.

"The most important thing we did to start the process of democratizing the way we donated was let the employees choose the charities and then let them make the actual donation on the company’s behalf."

The City Bin Co. Leaderboard updates in real time with the latest contributor and the trending causes.[/caption]

Employee Patricia Comer chose Irish Guide Dogs for the Blind. “I have bred puppies and sold them to the guide dogs in France and Ireland and have also gifted puppies to the charity,” she explained. “There is so much work done behind the scenes in order to get a dog fully trained and ready for a family.”

Caroline O’Reilly’s decision to nominate Our Lady’s Hospital for Sick Children in Crumlin arose from a close friend’s personal tragedy, the loss of a three-year-old son to heart disease. “I have spent time in Crumlin and have witnessed first-hand the amazing work they do,” she wrote, calling City Bin’s decision to consult employees about the company’s charitable contributions “a great idea.”

“We don’t get these kind of responses when we send out emails saying, ‘We just bought five new trucks,’ says Gene. “These were very much from the heart.”

The program’s mechanics are beautifully simple. Once the registered charities had been selected, employees received an email on Sunday with a link inviting them to make a donation on behalf of The City Bin Co. to their charity of choice. Choosing for the emails to go out on Sunday was a strategic choice; selected in part for its potential to mitigate the missive getting lost in the Bermuda Triangle of a busy workday, and in part to generate maximum potential for viral effect.

"We don’t get these kind of responses when we send out emails saying, ‘We just bought five new trucks,’ says Gene. “These were very much from the heart."

“If employees are out with other people and see the email, they might show it to their friends and their friends might feel like their company could engage in something similar,” says Gene. “Unlike the typical competitive environment, I don’t lose anything from another company wanting to do this. I think we actually all benefit.” 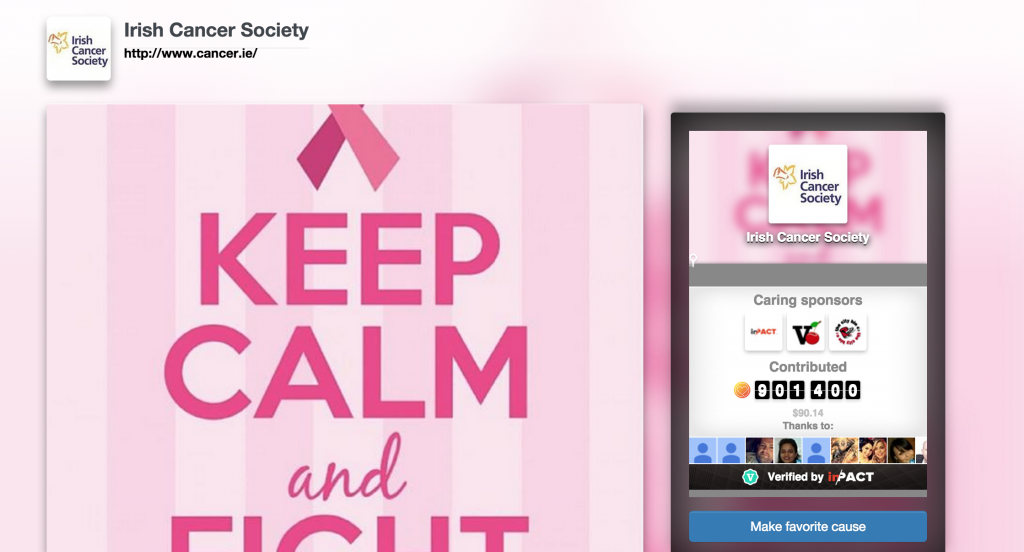 One of the causes, Irish Cancer Society, that City Bin Co. employees chose to benefit from their GivingDay.[/caption]

The GivingDay program is just the latest manifestation of Gene’s commitment to pushing the envelope further. The City Bin Co. was the first waste collection company in Ireland to receive an ISO 9000 accreditation and was honored with a Deloitte Best Managed Companies (Ireland) Award in 2009, 2010 and 2011 in addition to the Gold Standard Award in 2012.

“Our best clients are perfectionists and Gene is definitely one of them,” says in/PACT Founder and Chairman Amar Sharany, “You want someone who is going to give you a real challenge, someone who can use the product, but also help improve it. I told the team, ‘When Gene says it’s OK, then we’re not going to have a problem with anybody else.’” 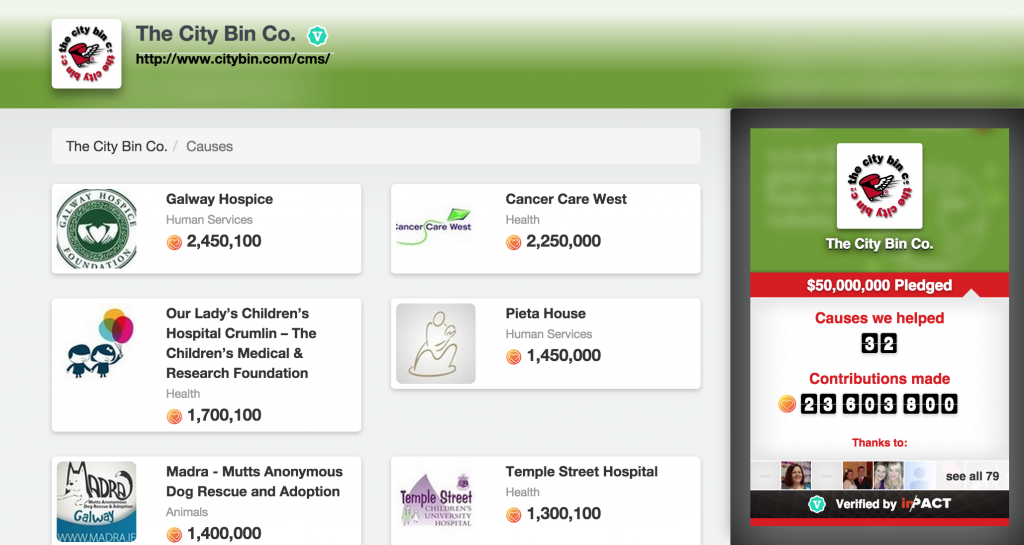 A selection of causes supported by The City Bin Co. and the interactive Impact Widget.[/caption]

More and more at in/PACT, we’re witnessing an emerging social movement which seeks the ability for stakeholders to act to transform the world for the better. As City Bin’s experience with in/PACT’s GivingDay program goes to show, the future of technology as a conductor of purpose is here.