CSR... ESG... 3BL... How Purpose Can Help Reshape Social Engagement. (And Can We Please Find A New Term?) 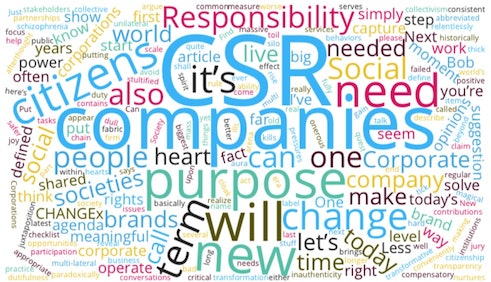 Over the last several weeks I’ve been reaching out to thought leaders in the corporate and brand purpose arena as part of a quest to understand how companies are responding to the extraordinary pressure cooker of social change that has dominated headlines, mobilized movements and confronted brands with new and urgent challenges.

One consistent stumbling block has emerged in these otherwise stimulating and energizing conversations, and it revolves around terminology, on one level. But deeper than that, it’s a also a struggle with how to reframe the meaning and purpose of the work that companies and brands have been earnestly conducting, for years, under the onerous moniker “Corporate Social Responsibility.”

Of course, today, labels already have started to evolve, under the inexorable influence of Purpose which emerged as a guiding and unifying force for corporations that wish to align around higher values, while still maintaining commitments to shareholders to run growing, profitable businesses. Thus the birth of Triple Bottom Line (TBL or 3BL) plus People Planet Profit (PPP) within it, then ESG (Environment, Society, Governance), broader concepts like Corporate Citizenship (CC) and increasingly today DEI (Diversity, Equity, Inclusion). This alphabet soup often simply gets summed up (still today) under the much used moniker of “Sustainability” which remains a kind of shorthand for “making sure the business can survive and thrive by acting responsibly to not screw up the environment and societies in which the business operates.”

The crux of the matter is that there isn’t an acceptable taxonomy across all stakeholders for how companies should participate in the social fabric in better ways -- and often the term that’s used reflects the biases of the person using it. Because CSR (or whatever you call it) often ended up being an essential reflection of the role that so-named 'team' or 'department' played, the issue became one of alignment within companies that wish to embrace purpose-based strategies.

Where Does Purpose Belong?

As a consequence, the CSR role, when it became a thing, was often given to the person at the company perceived to have the biggest “heart” - it then became more professionally strategized / sourced / staffed as the moniker grew in importance publicly. BUT, it still remained a separate group, often somewhere inside or adjacent the comms team, and its (modest?) budget reflected its relative position as a sub-department or “adjacent” discipline.

For other companies, CSR sat inside Marketing -- aligned with the purpose of the company and took into account the sector in which the company operated, and/or the communities in which it lived. But that approach has its own limitations when it neglects to deal with either issues far up the supply chain, or far down the consumer value proposition in terms of issues such as social justice.

The key to where this function or department belongs within an organization is a reflection of its importance to the company's key decision-makers. Do they truly wish to have an impact, and do they want to be known for it?

But to do that, there’s a clear need today to reinvent the terminology, definition and fundamental reality of what still remains largely practiced under the term CSR in many companies, particularly those that have failed to effectively respond to the forces of social evolution that, in recent months, have been amplified and accelerated dramatically.

I would argue that we need a new way to talk about the more business-critical contributions CSR can make. We need a new vernacular that will require mobilizing the hearts and minds and talents of the industry. And if you're reading this article, we need your help!

But first we need to unbundle why change is so desperately needed.

Could any label appear today more stultified, more holier than thou and paradoxically more soulless, more off-putting and more, well, irrelevant, than the term we’ve conveniently abbreviated to CSR? At a time when corporations and brands are called upon, more than ever, to step up and show up, to leverage their massive power to effect positive changeabove and beyond simply generating profits, the old playbooks that defined how to respond to the many needs in the world at large no longer seem adequate.

So let’s start with the name and let’s start with the C for Corporate. In this multi stakeholder, bottom-up universe it’s hard to imagine an approach more top-down and unilateral than this, the immodest suggestion that predicates how we can solve the world’s most pressing issues by putting Corporations first.

Bob Pearson, the Founder of the Next Practice Group, offered one suggestion: instead of CSR we should call it OSR — Our Social Responsibility. Decidedly a step in the right direction. In an era of collectivism, of multi-lateral partnerships, of mass scale participation and of movements making change, projecting the shared ownership of the social purpose agenda is both appropriate and salient. But does it really go far enough?

Next we come to Social, with its evocation of Society, of the fabric of the community and the imperative to put the common good above the individual gain. In juxtaposition to Corporate it serves as a reminder that companies do not live in splendid isolation but are inseparable from the world and the communities in which they operate. It also contains the human dimension — people after all make up societies. And societies need the goods and services that corporations produce, through the talent and toil of the people who work there.

Today it is impossible to think of the people companies touch — and please let’s not call them “stakeholders” — without thinking of them as citizens of the societies they live in. Consumers are citizens, workers are citizens, investors are citizens and the far off people way down at the very end of that very long supply chain are citizens.

And citizens have rights and they have opinions and more likely than not in today’s highly fraught context they will make those opinions heard and they will claim their rights. And, both because of the unforgiving transparency all companies operate under today and because citizenship has become borderless, somehow the term Social doesn’t quite seem to fully capture the new normal and its imperatives.

That brings us to Responsibility. Ugh. If anyone nurtures fondness for household chores, thick rule books and regular jury duty then you’re probably okay with wrapping up one of the most meaningful and important tasks a company can do with a big dull ribbon of dutifulness. Things that you have to do rarely rise to the level of things that you willingly embrace. And carrying the connotation of obligation basically kills the joy in any endeavor.

For years companies have assumed the burden of CSR because they had to, and they had to either because it offset bad stuff the company was doing elsewhere or because it was simply one of those boxes that companies needed to tick. CSR was often measured by its ability to neutralize ills or to cloak compensatory behaviors in the aura of being “the right thing to do.”

At the Heart of How Companies Manage Social Change

Bringing CSR out of the silo in which it has often languished will complete the needed transformation of today’s purpose-led firm. Embedding CSR as an expression of purpose at the heart of the business and the brand will avoid the schizophrenia, the inauthenticity or worse the duplicity that has historically marked CSR when it’s treated as a corrective measure.

And it will also put Purpose at the heart of how companies drive change.

So it’s time for a new term and more than a new term, a new practice. One that reflects the fact that companies have it within their power to engineer the progress that our public institutions have failed to realize. That social purpose can and should be a transformative act, not an afterthought or an item on a corporate checklist. That the urgent social pressures that are confronting companies are opportunities to be seized and mandates to be undertaken. That EVERYTHING a company does should be defined by purpose and by an agenda to achieve real and meaningful change.

This is the moment in this article when there should be a drumroll and a big reveal. Ta-da! and here’s the magical solution to the problem I’ve been bending over backwards to describe, the term that will capture the “new, improved” CSR. But you know what? In the spirit of these collective times we live in, and the fact that (as Bob says) it’s Our Responsibility, and also simply because I haven’t figured it out yet, I want to know what you think.

So what shall we call Next Generation CSR (or ESG or 3BL)? A purpose-based practice reinvented to meet the challenges society is relentlessly throwing at companies and brands, a CSR that is of the moment and reflective of how the biggest problems we have to solve need all of us, working together, all the time.

Put your suggestions in the comments! And thanks for everything you do today to show that empathy, solidarity, generosity and shared commitment are at the heart of building a better, safer and more sustainable world.