Every Little... and The Ripple Effect 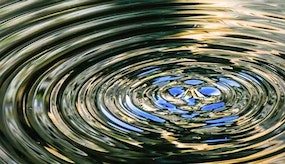 The happiness of life is made up of minute fractions -- the little soon forgotten charities of a kiss or smile, a kind look, a heartfelt compliment, and the countless infinitesimals of pleasurable and genial feeling.       — Samuel Taylor Coleridge

One of the UK's most iconic and enduring advertising slogans is the one that helped build Tesco into the dominant and (mostly) beloved retail brand it is today. Every little helps – in three little words, Tesco signals to its customers, and to its employees, the chain's commitment to detail, to the small things, and more importantly its commitment to delivering cost savings — making people’s lives better, day in and day out, for a little less.

The line is brilliant not only in its familiarity and simplicity of expression but in its counter-intuitive nature: it disrupts the conventions of the retail category where everything is bigger! cheaper! better! In three little words, Tesco announced that people should, paradoxically, expect less…. very much the same thing Volkswagen had proclaimed, several decades earlier, to a hypertrophic US car market: Think Small.

Of course, Volkswagen has gone on more recently to cover itself in shame due to downsizing, or deficiencies, of another nature — i.e. their craven economies of integrity when it came to environmental standards. That scandal has turned the principle of thinking small into a twisted mantra of a corporate culture built on deception -- and that has come close to destroying one of the world’s great brands.

When it Comes to Giving, Think Small

We live, in fact, in a culture of upsizing — and the world of philanthropy is no exception. Even in the area of giving, it seems that bigger has become better. We have gotten accustomed to celebrating the enormous gift, the biggest giver, the large splashy fund-raising event, the huge campaign, the one-time let-it-all-hang-out explosion of generosity…. as opposed to the simple daily gesture, the repeated random act of kindness, the simple unspectacular charitable act.

A couple of months ago, after attending an event at the United Nations, I wrote about the “motherhood versus the Mother’s Day” model of giving. How even small acts of giving can add up to big change. It seems increasingly that this is an idea whose time has come.

The inspiration for that reflection was a startling fact I learned at that conference: that just one penny increase in price per pound of produce sold in US supermarkets would generate enough additional revenues for the food industry to be able to double the salaries of farm workers.

Let’s apply that same logic to giving and to the economy at large. The GDP in the US is hovering in the vicinity of $17 trillion dollars, of which about 70% or $12 trillion dollars, is accounted for by consumer spending. If just 1% or one penny per consumer dollar spent were redirected to charity, it would generate $120 billion incremental dollars that would go towards good causes.

That math underlines why Pope Francis’s injunction to reform our consumerist culture is so important: it would take so little to make such a big difference. Simply by more conscious consumerism — and by connecting every act of buying to a reciprocal act of giving — our entire economy could become one vast engine for good.

The Season of Giving

Every year around this time our attentions are focused on giving — whether it’s the annual reminder of ThanksGIVING, or else GIVING Tuesday… and of course, the rush to buy Christmas GIFTS, followed often by New Year’s Resolutions that we will be better people, more dedicated, more generous, more GIVING. Oh, and thinner as well.

As a demonstration of how every little bit helps, just keep in mind those familiar beacons we see outside the department stores every year, the Salvation Army Santas with their ringing bells, encouraging people to dig into their pockets and toss some change into the bucket. Do you think that change adds up? You bet it does. Just a few years ago, at the height of the recent recession, the Salvation Army broke all the previous records in collecting $139 million dollars through those festive buckets, a few pennies, dimes and quarters at a time.

In a world where the rich just seem to get richer and the poor poorer, there is a generosity gap as well as an income gap: in America, those who earn less than $20,000 a year are twice as charitable, as a percentage of income, as those who earn $100,000 a year. The wealthiest 10% of Americans only account for 25% of all charitable giving in absolute terms. Giving the disparity in wealth, that percentage should be much bigger.

Obama was the first President to harness the power of small donations to make a difference. During his 2008 campaign, he raised $28 million online, 40% of which came from donors who gave less than $25.

If anyone gets it, it’s the Millennials. If you don’t believe it, just watch this video from The Collective Project on the Ripple Effect. Oh, and on the theme of corporations stepping up, for the record this initiative is sponsored in part by Microsoft.

The Piggy Bank of Change

In the aftermath of the recent terrorist attacks in Paris, the inimitable Stephen Colbert used his Tonight Show bully pulpit to celebrate the power of small gestures to make a difference. He spoke to the difficulty people have believing change is within their means — that when problems in the world become so overwhelming, it’s hard to accept that one person, with limited means at their disposal, can make a difference.

Colbert went on to enumerate some of the simple things people can do — some of them silly, some more meaningful — to show solidarity or support for those who suffer or who are in need, and to counter the forces of evil in the world.

"Anything that is an attempt at human connection in the world right now is positive,” he concluded.

That day, my attention had been drawn to the story of a seven-year-old boy in Texas who broke his piggy bank in order to donate $20 to support a local mosque that had been vandalized in an apparent hate crime, “inspired” (if that term can even be used) by those same Paris attacks.

It wasn’t much. A handful of change at best. The boy, Jack Swanson, went over to the mosque himself to hand over his money, a few dollars and cents that he had collected, penny by penny, over perhaps a period of years. He may have known it wasn’t much; to Jack it didn’t matter.

“Jack’s $20 are worth $20 million to us because it’s the thought that counts,”declared one of the mosque’s board members when interviewed by ABC Newsthat day. “Jack is just a little older than my son, Ibrahim. If we have more kind-hearted kids like them in the world, I have hope for our future.”

Jack’s gesture is like that proverbial pebble thrown into the pond. It wasn’t much. But it was everything.