How To Drive Meaningful Engagement At Your Next Event 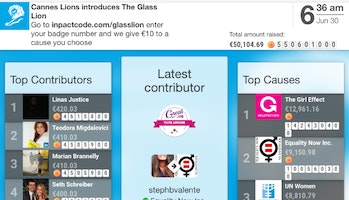 In partnership with the Cannes Lions, in/PACT created an immersive experience that allowed delegates to actively participate in the organization's commitment to give back.

Over the years, The Cannes Lions International Festival of Creativity has evolved from a somewhat self-indulgent exercise in ad agency back-slapping to become the definitive celebration of how the very best ideas -- across disciplines and platforms -- can build brands, captivate audiences and create social movements.

Extending their commitment to showcase and reward the power of creativity to address the world's most burning issues, the organizers this year brought in/PACT to help launch the first ever Glass Lion, recognizing campaigns, programs and initiatives that support gender equality.

The program became one of the highlights of Cannes Lions 2015 and an example of how in/PACT's interactive cause marketing technology platform was able to leverage "people-empowered giving" to invite the conference delegates into the heart and soul of the program, by allowing them to participate directly in the organization's commitment to give back.

It took, first of all, the generous commitment of Cannes Lions to donate 100% of the agency submission fees in the newly created category, for a grand total of 87,340 euros, to support gender equality. But having done that, they were faced with a problem: which cause, or causes, to choose?

"It would have been a political decision, it would have been under the microscope whatever we decided," explained Phil Thomas, CEO of Cannes Lions. "But the idea of using your platform and allowing our delegates to make that choice, I just thought, that's genius, that's exactly what we should do."

Diving into a database of close to one million registered nonprofits, in/PACT helped curate first a long list, then a final select list of ten gender equality causes, including Equality Now, the Geena Davis Institute on Gender in Media, the Gender and Development Network, the Global Fund for Women, Men Engage, No Ceilings, Pro Mujer, The Girl Effect, UN Women, and Women for Women International.

Using their Cannes Lions badge numbers, delegates were able to consult the list of causes to make their selection and direct anywhere from 10 euros to 100 euros to one of the ten causes. As they did so, their pictures popped up on the LeaderBoard on display at the Palais de Festivals in Cannes. At the end of the week, The Girl Effect was leading the pack of worthy gender equality causes.

Cheers from the Crowd

"The Glass Lions was chaired by the passionate and feisty Cindy Gallop," reported Steve Barrett from PR Week, "and she produced some of the loudest cheers of the week with her exhortations to the industry to work much harder to foster gender equality and diversity in marketing communications."

Cindy encouraged the audience to "tweet the shit" out of the event, using the #GlassLion hashtag.

In the Palais, delegates used their smart phones to make their claim and direct their contributions -- not from their own pockets, but from the coffers of the Cannes Lions -- to support the cause of gender equality.

"I think it's awesome that you get to choose where the money is going," said one Millennial aged delegate. "It makes it more personal and you get involved in the cause."

in/PACT's newly appointed brand ambassador, Gabriela Isler, was in Cannes for the occasion and provided an exclusive interview to PR Week. Herself a Millennial, Gabriela explained her passion for in/PACT's concept of "people-empowered giving."

"Young people are changing the world," she said. "I'm really in love with the in/PACT platform and we're here to spread the word!"

The Era of Consumer Activated Purpose

Overall, the Glass Lion program in Cannes provided a cutting edge example of how companies and organizations must go beyond simply stating their purpose or broadcasting it to the world. Increasingly, they need to be able to engage their stakeholders -- whether it's an employee, a customer or someone attending a sponsored event -- and to invite them to become a part of activating a company's or a brand's purpose.

As with everything else in the world of marketing and branding, corporate and brand philanthropy, or purpose-driven programs, are today held to a higher standard by consumers, who expect to be able to play an active role in shaping how companies embrace higher values and how those values get expressed.

"I have very strong views on corporate philanthropy," said Cindy Gallop, a vocal proponent of the need for companies to step up and embrace purpose at the core of how they do business. "I believe the future of business is doing good and making money simultaneously."

One of the most heartfelt responses came from one of the winners of the inaugural Glass Lion. Standing on the steps of the Palais after the ceremony, she spoke first about the importance of an award recognizing gender equality.

"For me this is a very important Lion," she said, "because it gives credit to half of the world's population.

"And as for the donation," she continued, "I think it's great to have this whole world that is making money giving money back."

As delegates headed back to the real world at the end of last week from the intense and inspiring microcosm of Cannes, they were able to continue to direct donations from the Lions to the causes they were the most passionate about, while  some took the time to salute the initiative.

The final word goes to this delegate, who said: "It's not just about saying 'Look how great we are' but it's about empowering us to give back and to make a difference."

To learn more about our Glass Lion activation, visit our blog.