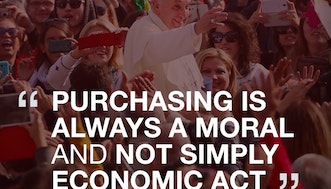 The Pope's inspiring and often blunt words on his US visit contained an underlying theme: that consumer culture needs to evolve to help recreate and reinforce social bonds.

Wow. That seems to have been the universal reaction to the series of bold and uncompromising injunctions that Pope Francis issued to the world during his speeches to the US Congress, the United Nations and, on Sunday, at both religious and secular appearances in Philadelphia.

Whether he was addressing the pressing issues of the world today -- the refugee crisis, the violence and unrest that still afflicts huge swaths of the global map, the disintegration of the nuclear family or the suffering of victims of exclusion, prejudice and sexual aggression -- this Pope has in one fell swoop "reframed the debate" and refocused attention on what really matters. He has made the Catholic Church not only relevant again, but necessary.

One unifying theme has emerged though, one that is in some respects the most revolutionary and potent of Pope Francis's reformist agenda: the need to undertake to reshape our global consumerist culture, to reconnect it to not only more sustainable choices for the planet, but choices and behaviors that link how we consume to how we give back. That, in a nutshell, the world needs to work towards helping reconstitute our tattered social fabric by making consuming an engine for good.

The initial shot over the bow, so to speak, was contained in a much-neglected sentence in the Pope's earlier encyclical on climate change, in which he declared: "Purchasing is always a moral and not simply an economic act."

The core idea here is brilliantly simple, meaningful and actionable. Every consumer, every time he or she makes a purchase, can make a difference. By making different choices of what to buy, where to buy, how to buy, and, yes, how often to buy, each individual in our society can drive change by making informed choices that connect those acts of buying to the impact each purchase has on our world. By extension, it is also a challenge to companies to step up and do their part to allow purchase and purpose to connect.

Now, on his historic trip to the US, the Pope has (so to speak) doubled down.

At his Sunday service this week, in his most explicit statements to date on this theme, the Pope compared our modern consumer culture (and by extension much of society, at the center of which sits consumerism) to a massive impersonal supermarket, where people in their role as consumers have lost their moral compass. He placed this in comparison to the old-fashioned Mom and Pop shop, where consuming was integrally connected to social and familial connections, where the act of buying was not only more responsible, more socially connected but also more intimate and personal.

“The world seems to have become one of these great supermarkets; our culture has become more and more competitive,” he said. “Today’s culture seems to encourage people not to bond with anything or anyone, not to trust.”

Pope Francis is anything but naive. What from anyone else might have come across as a nostalgic "blast from the past" instead posits a thrilling challenge to use the means at our disposal today -- notably technology, social media and mass scale connectivity -- to reinvent the way we consume.

A couple of years ago, when Pope Francis was still just taking his first public steps in his freshly minted papal mandate, I spoke at a conference about what was at the time the first Pope in history to have ever taken a selfie. While that headline-making incident might appear trivial in retrospect, and in the light of some of the momentous issues he is now tackling head on, it still shows how this Pope is focused on not only what needs to change, but how to change it.

People today are living in "a kind of impoverishment born of a widespread and radical sense of loneliness," the Pope stated on Sunday. "Running after the latest fad, accumulating 'friends' on one of the social networks, we get caught up in what contemporary society has to offer. Loneliness with fear of commitment in a limitless effort to feel recognized."

With the generosity of spirit you would expect from a Pope, but also the clarity we have come to expect from this Pope, Francis went on to conclude: “Should we blame our young people for having grown up in this kind of society? Should we condemn them for living in this kind of a world...?

"No, I do not think that this is the way. As shepherds following in the footsteps of the Good Shepherd, we are asked to seek out, to accompany, to lift up, to bind up the wounds of our time," he went on, specifically addressing the role the leaders of the church can play, but which extends well beyond that.

"To look at things realistically, with the eyes of one who feels called to action... The world today demands this conversion on our part.”

Although Pope Francis in his reformist words and actions may be giving the Catholic Church more contemporary salience and importance, his messages are to a large degree universal; they are relevant to everyone. My family, for example, comes from robust Protestant Presbyterian stock, while my wife is the product of a "mildly" Catholic upbringing; our son is engaged to an Asian woman whose family embraces the Buddhist faith; for many years, I have worked closely with Muslims, have counted them as friends, colleagues and partners, and lived within range of the daily prayer calls coming from the local mosque; and many of my most cherished friendships are with Jews. The Pope's words should resonate with each and every one.

The power of Pope Francis is in his ability to frame major moral and humanistic challenges as matters of universal consequence, matters that transcend specific faiths and belief systems. His challenge to all of us to rethink our behaviors as consumers has implications for people everywhere, but is also a call to action to the governments, the NGOs, the companies and the brands who have the power and the means to help orchestrate this shift.

In closing, let's reflect upon the question Pope Francis used in his homily in Philadelphia, quoting an earlier Pope, Leo XII, in a challenge to action which was both specific and general in nature:

"What about you?" that earlier Pope had said. "What are you going to do?"

For me, Pope Francis in this past week, in a handful of moving and impactful speeches and sermons, has brought enormous clarity to that question. It's up to each of us, every day, in everything we do, no matter how large or small, to take responsibility for changing the way we consume and in doing so, to make the world a better place.

To learn how in/PACT is working to do our part, not only imagining but engineering how we can change the world, by putting purpose at the heart of purchase, see our manifesto and also these inspiring videos from Jim Stengel, architect of the concept of the purpose-driven brand and Chairman of the in/PACT Advisory Board.