NewsFlash: I Think I Just Attended the Affluent Millennials' Woodstock 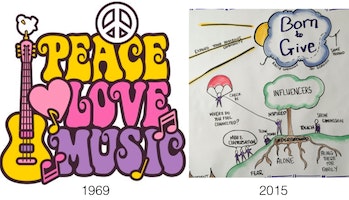 The Nexus Global Youth Summit in NYC Last Week Brought Enlightenment to this Child of the Sixties...

Back in the sixties, the fight for societal change happened under the colors of the tie-dyed tee shirt and to the beat of a different drum. Countercultural slogans urged people to "make love not war" and to "turn on, tune in and drop out." The enemy was the Establishment, the icon the peace symbol, the societal ideal the commune, and the badge of rebellion the length of one's hair. I know; I was there.

For the millennial generation, activism takes place not from outside the System but from within. Slogans have been replaced by hashtags and the agenda for "making the world a better place" often comes in the form of a tweet, a Facebook post or a YouTube video campaign. The idealism of the previous generation has given way to a kind of enlightened optimism that is nonetheless grounded in practical action. Convening a movement can happen on social media, of course, but also, on occasion, as was the case last week in New York, in the halls of the United Nations. I know; I was there.

I speak of the Nexus Global Youth Summit, now in its fifth year, and which, as its website boasts, hosted last week hundreds of participants from around the world, including young wealth-holders, social entrepreneurs, philanthropists, movement leaders and more. That the conference was held in the hallowed halls of the United Nations only seemed to enhance the feeling that history was being made. The headline in the Huffington Post nailed it: "Minds and Money Meet, Pushing the World Forward."

For those who are unfamiliar with Nexus (a category which until recently included me) the group is an international non-profit organization founded in 2011 by Jonah Wittkamper and Rachel Cohen Gerrol. Its stated mission is to catalyze new leadership for addressing global problems, the vehicles for which are global summits, salons, and other programs. Nexus works to increase and improve philanthropy and impact investing by bridging communities of wealth and social entrepreneurship.

The "nexus" here represents the intersection between characteristics and features which both connect and set apart the millennial generation from the social activists of my own day and age: Youth (which the hippies also had, abundantly) and Wealth (of which they tended to have very little); Education (university campuses were of course the hotbeds of sixties activism) and Entrepreneurship (which for any self-respecting child of the sixties was a decidedly dirty word); the desire for Positive Change (the ultimate common denominator) and the enabling Technologies (in the sixties even the fax machine was still a pipe dream... although pipes on the other hand, notably bongs, had reached an advanced state of sophistication).

At the UN last week the feeling of earnest reformism was palpable and uplifting; the agenda was heavy with purpose. Speakers ranged from Jeremy Heimans, activist since the age of eight and founder of the agency Purpose, who spoke about how change increasingly happens through peer-to-peer networks and mass participation; Deepak Chopra, who spoke about giving and the Inner Revolution; Hamdi Ulukaya, the CEO of Chobani, who spoke about the connection between entrepreneurship and philanthropy; and finally to our friend Elliot Kotek, co-founder of Not Impossible Labs, who spoke about the power of technology to transform humanity.

And although -- along with a few other representatives of my generation scattered throughout the audience -- my very presence raised the average age in the room by several notches, I felt I was actually the one who was on the receiving end of a generous dose of learning, wisdom and enlightenment. Here's a few things I learned, from the conference itself and from the speakers who were there, as well as from the eloquently entitled "Born to Give," the white paper published by Nexus on the occasion of this year's Summit:

- over $40 TRILLION in wealth will transfer from baby boomers to the next generations between now and the year 2051. This creates a massive opportunity but also a massive challenge for the world of philanthropy.

- 72% of the $335 billion in charitable donations given in 2013 came from individual donors, underlining the degree to which corporations still need to step up.

- middle class families are more generous in their giving than their more affluent counterparts. Groups such as Nexus are striving to change that.

- this same generation reports that the most important motivator for them in charitable giving is "to support a cause that I believe in or which fits with my personal values."

Sitting in the audience at the United Nations last week, I was momentarily carried back to a moment in my own youth when, one Saturday morning, I lobbied my parents to join me in a march against the Vietnam War, organized by a student group at a nearby university. I still remember the feeling of pride I had when my parents -- who were of a liberal bent but who, like many, were shy about manifesting it in public -- agreed to walk by my side while my beaming and earnest 12-year-old self flashed the peace sign at the crowd as our anti-war march made its way down Main Street.

At the time, we couldn't tweet about it, of course. There are no "selfies" commemorating that day. The desire for political impact and change was real, but its reach was limited to a few blocks in that college town. It was only because that "isolated" act was being repeated on tens of thousands of campuses and in towns across the country that the collective voice was heard. And that change eventually happened.

In some respects, the Occupy Wall Street movement of 2011 (interestingly and tellingly the same year Nexus was founded) was both an anachronistic throwback and a new age hybrid of the real and the virtual, a "sit-in" a la the Sixties but with all the bells and whistles of social media. The fact though that the Occupy movement does not appear to have engendered a sustained organization or platform for activism is the best indication, as Bob Dylan sang, that the times they are a-changin'.

In his talk last Thursday, Jeremy Heimans spoke about the shifting dynamic of what he calls New Power, which has fundamentally changed the ability of mass movements to gather momentum and have meaningful impact. It is because, at long last, thanks to technology, the balance of power has fundamentally and irrevocably shifted out of the hands of what we used to call the Establishment back in the sixties, to place it instead in the hands of individuals everywhere: "The modus operandi of Old Power is that it downloads and commands," Heimans commented. "New Power uploads and shares."

For me, the greatest takeaway from the Nexus summit last week -- and one that connects me again to the advocacy of my own youth back in the Sixties -- is the notion of what I would call "empowered empathy." Whether it was my own feeling of horror at seeing the first images of napalmed children in Vietnam or millennials experiencing a sense of outrage about starving populations in Africa, or global warming, or gender inequality, or human trafficking, or any of the scores of burning issues that still, shamefully, require our urgent and committed attention, the common strand is the desire to make a difference and its much needed corollary, the imperative to Act.

In that audience at the United Nations last week, I saw a generation that not only has a irrepressible desire to change the world, but which finally is in possession of the technology, the networks, the wealth and the power to actually be able to do it.

As the famous Apple manifesto once said, "the people who are crazy enough to think they can change the world are the ones who do." And ironically but perhaps fittingly, Apple is one of the enablers that has put the power to drive change right in people's hands. Or, as someone said to me last week, they've put purpose in people's pockets.

As for me, that, I think, is decidedly groovy.