Yes, Money Can Change the World 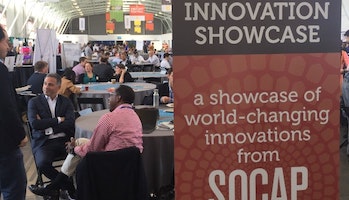 At SOCAP last week, people convened around the emerging trend towards impact investing as a means to combining purpose and profit.

In his 2013 book Happy Money, Professor Michael Norton of the Harvard Business school posits that money can buy you happiness -- if, at least in part, you are spending that money not for yourself, but for others. One of that book's core tenets -- the power of social good incentives to shape behaviors -- is at the heart of the technology platform that in/PACT is bringing to the world.

Last week, close to 3,000 entrepreneurs, venture capitalists, NGOs, impact investors and other true believers met in San Francisco to discuss, debate, evangelize about and even sing about a decidedly more ambitious premise: that money can change the world. I was there, and I left with an even bigger appetite to harness the power of business, and money, to drive meaningful change.

Despite what its name suggests, SOCAP is not about the mashup of Socialism and Capitalism, although from many of the impassioned speeches about the importance of fixing the world's problems while still making money, you might have thought that was the case. Instead, by placing itself, in its own words, "at the intersection of money and meaning," SOCAP sits squarely at the forefront of the movement towards a mashup of a different kind: that of doing well and doing good.

The brainchild of former journalist, venture capitalist and philanthropist Kevin Jones, SOCAP has just marked its eighth year, and during that time it has achieved significant momentum. Impact investment -- the trend towards seeking to place money in ventures that will both achieve meaningful social impact while also turning a profit -- has gone from being a somewhat marginal and quaint behavior at the fringes of our otherwise rapacious capital markets to a full-fledged movement that is reshaping how people everywhere, on every level, look at investing their money.

Just as we know that millennials today hold brands to a different standard -- insisting that they not only deliver valuable intrinsic benefits, but also that they reflect higher values -- so does a new generation of investors look to place their money in areas that are "cause-based," as well as "return-based."

Here's just a few headlines from a conference that was extremely "rich" in content and insights:

Throughout the SOCAP conference, there was also a strong west coast vibe, with the requisite quinoa at lunch and a studied earnestness among the crowd, bolstered by the conviction that what was happening there was vitally important. It reminded me of the time I spent just a few weeks ago at the Nexus Summit at the United Nations, which in turn reminded me of the Sixties and an earlier generation (my own) that set out to change the world.

And yet, the conjunction of that hippie vibe with the hardness of the unforgiving logic of Return on Investment gave SOCAP a decided edge. If people there were on a mission, that mission was grounded in a willingness to grapple with the hard realities and a flinty determination to not just talk about change, but to do something about it.

This prevailing paradox of hippie vibe and ruthless edge was given expression by the conference's "folk laureate," singer and composer Chuck Cannon, kind of a mashup between Bob Dylan and Kurt Cobain, whose lyrics served as the unofficial SOCAP anthem:

We're all underpaid and we're all overwhelmed, How I wish love was the coin of the realm, Where everyone's rich and nobody's poor In a place where money don't matter no more.

Well, Chuck, money does still matter, and will continue to matter for some time to come.

But, as I learned at SOCAP, money matters most when it most makes a difference.